Every Odia is strongly familiar with the temple food. Mahaprasad is extremely famous in Puri Temple of Lord Jagannath. People of Odisha have a very strong bond with Lord Jagannath. Not just him but his brother, Lord Balabhadhra, and his sister, Devi Subhadra, hold a special place in our hearts as well. While many well-known temples in India follow a rigid caste system, the doors of Puri Temple are open to all. That is the beauty of our state and its people.

Odisha’s food culture is one that is highly influenced by temple food. Puri temple is extremely famous for it. Said to feed around 25000 devotees every day, the numbers can go up to 100,000 on special occasions. There are many different legends associated with the Puri Temple. There are some associated with the kitchen and the food prepared as well.

Did you know Puri Temple’s Rosaghara is one of the MEGA-KITCHENS in India? That’s right. It is considered to be the second largest kitchen in India and the world!

Today I will be telling you about the wondrous Rosaghara of the Puri Temple.

Puri temple’s kitchen is known as Rosaghara. It is found in the south-east direction of Srimandir’s outer compound. The building itself is huge with over 32 rooms inside. It also has 250 earthen chulas (stoves) for the daily preparation of the Mahaprasad. Different dishes are made over different hearths. There are three hearths — Anna chuli, Pitha Chuli, and Ahia Chuli. There are 600 cooks and 400 assistants that help with the preparation every day. The eternal flame of the kitchen is known as Vaishnava Agni. It is never extinguished. Two wells, known as Ganga and  Jamuna take care of the daily water requirements of the kitchen.

Only the cooks or the Suaras are allowed anywhere near the kitchen during the food preparation process. They follow all the traditional rules stringently. They don’t sing, dance or chew betel inside the kitchen. It is believed that Shree Mahalakshmi cooks in the kitchen herself and all the suaras are her devoted servants. If she isn’t happy with the food, a dog mysteriously appears inside the premises. If it is seen, all the food is buried and the preparation is started again. No dogs are allowed inside the premises so this dog came to be recognized as Kutama Chandi, the tantric goddess in charge of purification of food. The cooked food is first offered to Lord Jagannath and then Devi Bimala.

When the food is carried to the gods, it has no aroma to it. Once lord Jagannath accepts the food offering, the gorgeous aroma fills the air. The food has been accepted, blessed, and it becomes the Mahaprasad we all know and love. Mentioned in the Brahma Purana is the following – “Naibedya puratonyasta drusteiba swikrutam maya, Bhakatsya rasangrena rasamashnami padmaja”. It means “The Lord tastes and feasts the Mahaprasad through His devotees”

During the days leading up to the famous Ratha Yatra, the Mahaprasad doesn’t taste as delightful since Shree Mahalakshmi is busy taking care of the sick Lord Jagannath.

Another true legend about the cooking inside the kitchen surrounds the clay pots. When they are placed for cooking, they are placed on top of each other. They are five to six in number and yet the top one cooks first! Mysterious right?

The food in the Puri Temple Kitchen is prepared with the utmost devotion and purity. Its spirituality can be felt by all those who are honored enough to eat it.

Next time, I will be telling you about the MAHAPRASAD that is prepared inside this sacred kitchen. 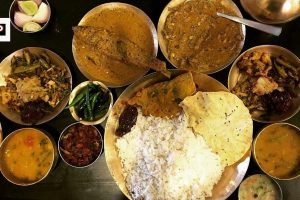